Not everything I write is as dark as my YA novel, How to Tend a Grave. Sometimes I produce amusing poetry for kids. And that can lead to other exciting things, like inventing a new sport.

Here’s how it happened. I got my start in poetry at an early age, when I entered three poems in the local Hobby Fair, and won first, second and third prizes. Okay, I’m not sure there were any other entries. But still.

As a teenager, I wrote a lot of poetry, now gone and best forgotten. But then when I had kids, I sold two poems to Chickadee magazine. That encouraged me to produce more poems for the children’s market, and although those were never published as a book as I’d hoped, one was accepted for Canadian Poems for Canadian Kids. 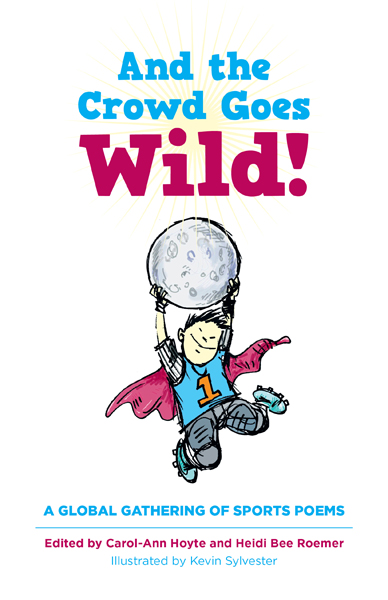 Now I’ve had another published in the terrific new anthology for Grades 3 – 6, And the Crowd Goes Wild! A Global Gathering of Sports Poems. The book is edited by Carol-Ann Hoyte and Heidi Bee Roemer, illustrated by Kevin Sylvester, and winner of the 2012 Bronze Moonbeam Award for Children’s Poetry.

When I saw the call for submissions for this anthology, I revised and submitted four of my in-the-drawer poems, and was thrilled when Heidi said they were interested in the one about a girl practicing piano while her friends are playing softball – if I’d make just a few tweaks.

Of course I would! Turns out she actually meant weeks. Heidi is one brilliant but very demanding editor. We tossed that poem back and forth for a full nine innings. She pushed me to throw harder, hit farther, run faster. I started calling her Coach.

Just when I thought practice was over, Coach said my poem needed a new title. I went through lists of sports and musical terms, but couldn’t find anything that worked. So I reconsidered where my poem came from.

As a kid I was an avid softball player, but a reluctant piano student. One year my piano exam conflicted with the city softball finals. My teacher forbid me to play ball, lest I not have time to prepare properly and to avoid injuring my fingers. No way was I listening to the “tick, tick, tick” of my metronome when I could be hearing the ump call “batter up!”. I did practice a bit though, and managed to get 73. But she wasn’t impressed – she considered anything less than 90 a bad reflection on her. She didn’t care at all when my team won the championship.

I didn’t care at all about anything but the joy of playing on that championship team with my friends.

And then, as these things go, once I stopped searching for a title for my poem and lost myself in the glory of my softball days, an idea came flying through the air. “Pianoball” felt pitch perfect. Coach declared it a winner and a new sport was born.

“Pianoball” is for all those kids who’d really rather be on the field.

I’ll be reading “Pianoball” at the Toronto launch for And the Crowd Goes Wild!

Please come cheer me on!

Looking for something specific?